Advances in our understanding of immune-active fats confirm that insufficient intakes of omega fatty acids and deficient endogenous production of their metabolites (including resolvins, protectins, maresins, and lipoxins) can result in dysregulated leukocyte and platelet activation and perpetuation of an imbalanced immune response. Such impairments in immune resolution have been linked to chronic inflammation and other immune-mediated conditions witha lack of omega supplementation.

It was previously thought that omega fatty acids like eicosapentaenoic acid (EPA), docosahexaenoic acid (DHA), and docosapentaenoic acid (DPA) modulate inflammatory processes primarily by interfering with the metabolism of arachidonic acid (AA). More recent research has discovered that metabolites of omega fats influence the course of an inflammatory response in an even more dynamic fashion by directly adjusting genomic control of immune cell populations and their functional programming.

Specialized pro-resolving mediators are so named because their activities are characterized by promoting resolution of an immune response after injury, infection, or inflammation by 1) moderating the recruitment of leukocytes to an affected area, 2) reconfiguring chemical messaging among immune cells during a response, and 3) promoting clearance of cell debris and dead cells. Certain SPMs/PRMs are also involved in tissue remodeling.

In this experiment, 22 healthy volunteers aged 18-45 were given a series of single doses of placebo or 1.5 g, 3.0 g, or 4.5 g of total omega fatty acids, in a double-blinded crossover study design. Blood samples were taken before and 2, 4, 6, and 24 hours after supplementation. Omega-3 fatty acids including ~46% EPA, ~33% DHA, ~18% DPA, and ~3% AA, and supplemented SPMs/PRMs included 17-hydroxy-DHA, 7-hydroxy-DHA, and 18-hydroxy-EPA (17-HDHA, 7-HDHA, and 18-HEPE). In addition to routine blood chemistry and hematology, blood levels of EPA, DHA, DPA, AA and their SPM/PRM metabolites were assessed at each time point.

The researchers also exposed samples of participants’ blood to the proinflammatory mediator platelet-aggregating factor (PAF) to investigate how supplementation may affect platelet aggregation and associated changes in immune activation and vascular function, and blood samples were separately exposed to pathogenic bacteria to study the effects of supplementation on the antimicrobial immune response. 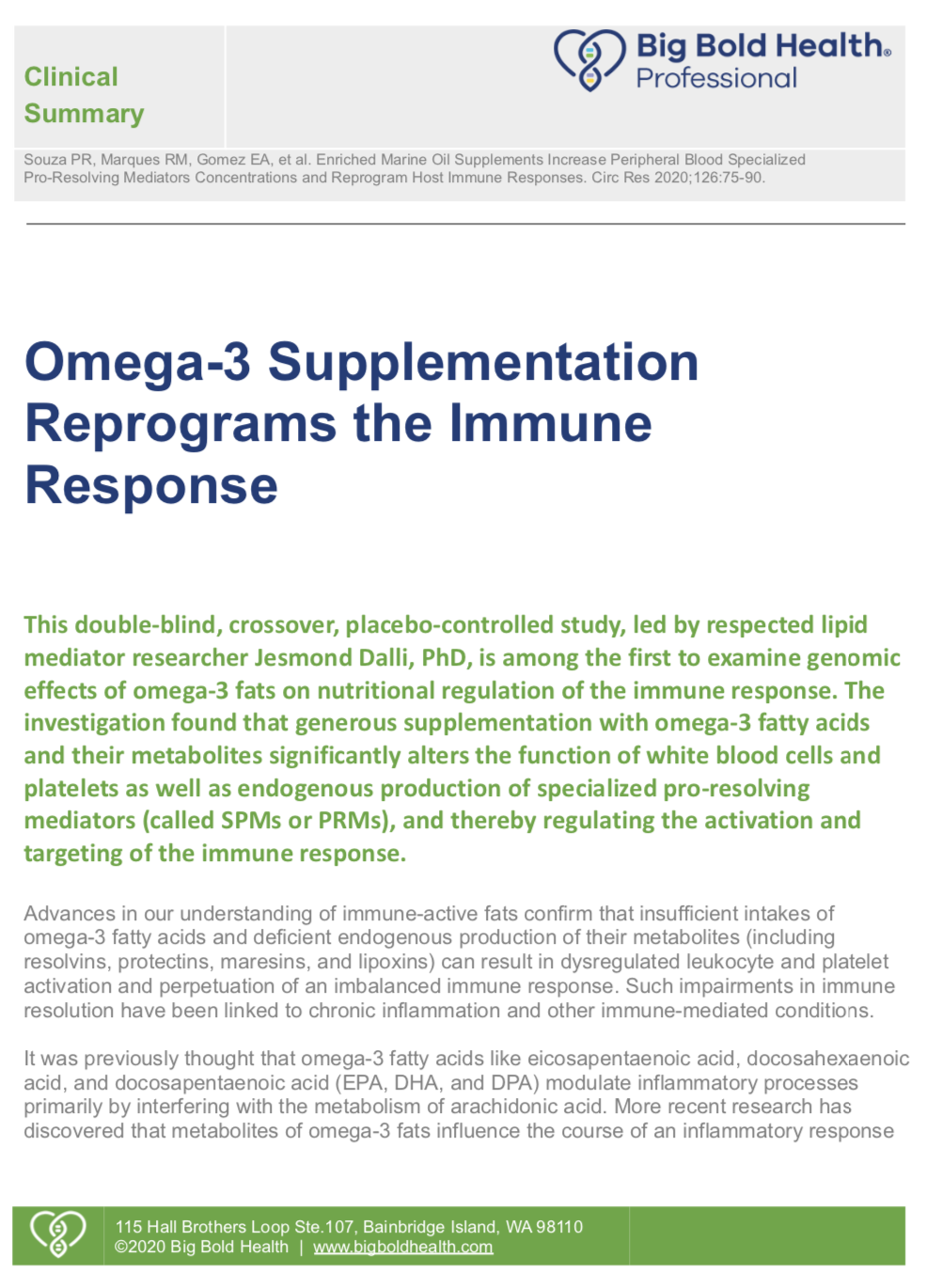 Omega fatty acids like EPA, DHA, and DPA have demonstrated many direct benefits to immune, cardiovascular, and neurocognitive health. Their nutritional influence extends further, however, through the actions of their specialized pro-resolving mediator (SPM/PRM) metabolites. SPMs/PRMs directly alter cell functions and cell-to-cell interactions, yet further regulate immunometabolic activity at the level of gene expression. SPMs/PRMs represent a high level of immune control that is largely dependent on sufficient dietary intakes of omega fatty acids.

How to Get Solid Sleep

Sleep: Recharge Your Batteries Brain Fog Friendly Summary One of the most effective ways to improve energy, mental clarity, and immune function while decreasing pain

Advances in our understanding of immune-active fats confirm that insufficient intakes of omega fatty acids and deficient endogenous production of their metabolites (including resolvins,

Gratitude and the Positive Impact on Learning

A most endearing part of our Thanksgiving tradition is reflecting on what we are grateful for. Previous research has revealed that gratitude is directly related

Clinical Study: Socks For Balance & Stability Summary of “Effect of DNS Socks on Overall Balance and Stability Using The Sway Medical Application“ If your foot